It’s not just the same trailer from Monday Night Football a couple of weeks back. It’s almost the same dialog, but with a handful of new footage from the film. Can this movie just come out now?!

The trailer was shown off at Blizzcon today. It looks pretty good and action packed. We can witness this war between humans and orcs June 10, 2016. Here is the trailer.

I know that is a very weird headline, especially for two mediums that are on the opposite ends of the spectrum. One is a family/kid friendly game that can be played with anybody. The other is an R movie you should hide your kids from, but this time they both meet in a pretty damn good mash up video. It’s just too perfect. Check it out below. 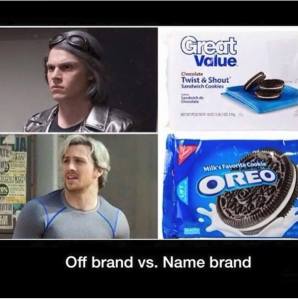 Okay, well maybe not really Marvel, but the Marvel Cinematic Universe Facebook page shared this image earlier this evening. Unless you’ve been living under a rock, there has been some speculation that there is a little bit of beef between Fox and M.C.U. In Quicksilver’s case, he appeared in Fox’s X-Men: Days of Future Past last year and this year he is featured in Marvel’s Avenger’s 2 along side his sister Scarlet witch. Fox owns the right’s to the X-Men universe and the word mutant and what sparked this little bit of beef is the fact that Marvel recently declared Quicksilver and Scarlet Witch not mutants. Could Marvel have made that decision out of spite? Who knows. This image is well played though. Well played.